This is a true life personal experience.  I’ll bet many readers of this have either had a similar experience or knows others who have.   While this story is about an experience in my personal life, it is absolutely representative of what people go through during organizational change.  I’ll follow-up this story with another real-life story from a corporate setting.  For reference, it may be useful to read a previous post: Why do we need Organizational Change Management?

The Blackberry to Android Transition 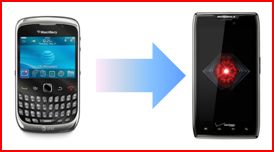 I had a Blackberry for a long time.  It was a corporate issue standard Blackberry with the hard QWERTY keyboard and the small screen.  Over the years I had become intimately familiar with all its capabilities and its quirks.  I knew that my phone functionality was hopelessly outdated, and that RIM, the maker of Blackberry, was in trouble and that they are probably going to be extinct soon.  I didn’t care.  I was going to use my Blackberry till the bitter end.  I was solidly in my comfort zone and solidly in denial – afraid to “let go” as long as I didn’t have to.

Have-to arrived sooner than I anticipated.  The USB connector that is used to charge the battery became intermittent and the phone had to be replaced or I risked losing everything.  I opted to go with a state-of-the-art Android-based phone.

One of the features I utilized on the Blackberry was the speed dial function.  My wife’s name is Wendy.  I setup the W key as a speed dial to call her cell phone.  I could do this by touch without looking – absolutely safely – anytime, anywhere, and did it often while driving.

Not long after the transition to the Android phone, I needed to call my wife from the road.  I instinctively reached for the W key but only got glass.  I pulled off the road.  I had to get my reading glasses out and scroll through menus to place a call to my wife.  This was clearly going to be a problem, but I wanted this new phone to work.  That night I tried to create a speed dial key with no success.   I eventually resorted to asking my 18 yr. old daughter to make a speed dial key for me.  To my astonishment she had no success either.  I was extremely frustrated at this point.  I hated the new phone it – I was sure it would never work.  I wanted to go back to the old way. I was ready to go to the phone store and exchange this modern marvel for a tried-and-true Blackberry and ride RIM into the sunset.

A few days later I was complaining about my new phone experience to a colleague.  She asked if I had a headset for the phone and that I should get it and plug it in.  Once attached, she directed me to “press the button.”  I had no idea what she was talking about.  I turns out that a small bump on the headphone wire that I thought was the microphone, was actually a button.  So I pressed the button.   I heard a computer generated voice ask me to, “Say a command.”  After a few moments of confusion and discussion with my colleague I finally commanded, “Call Wendy.”  Within a few second my wife’s cell phone was ringing.  After explaining to Wendy that I really didn’t need to talk to her about anything, I thanked my colleague.  …And I started thinking completely differently about my new phone.  Cut to the end – I now love my phone and wonder how I could have ever considered going back to a Blackberry.

I went through the four classic phases of personal change.

I started off in Denial.  Despite compelling logic and clear technological advantages, I was not going to change.  I only changed when forced to by an external cause beyond my control.

Once I had made the superficial technical change, the real changes began.  I was stuck in Bridges’ Neutral Zone, vacillating between Resistance and Exploration in the Four Phase model.  I was futilely trying to make the new phone work the way my old phone did.  It wasn’t until a “change agent” held my hand and showed me a solution to my personal source of frustration that I moved permanently from Resistance to Exploration.

Once I began exploring all the other features of the new phone I was hooked – I was committed to the new way of doing things.  I have no desire to return to the old way and have become a vocal advocate for the new way.

This was a major “a-ha” moment for me.  I saw that there were many important lessons here for every organizational change practitioner.  To paraphrase Peter Senge in The Fifth Discipline, “Although we are all interested in large scale change, we have to change one mind at a time.”