Vatican’s Bureaucracy Tests Even the Infallible

The famous Peter Drucker is generally cited as the originator of one of my favorite business world quotes, “Culture eats strategy for breakfast.”  I couldn’t help but think of that as I read a cover story in today’s paper about the challenges facing Pope Francis as he takes over the Vatican.

“…[S]aid a former superior general of a Roman Catholic religious order, who spent more than a decade in Rome. “Whoever is appointed, they get absorbed by the structure. Instead of you transforming the structure, the structure transforms you.”

I thought about some of the culture change challenges that I have faced, and am currently facing, that I thought were tough.  Read the article.  This one could be the all-time champ.  A 2000 yr. old institution, over a billion “associates” and the CEO really thinks he is God.  Makes me wonder why I ever complain about anything.  Good luck.

Read the full article in the NY Times here.

“…[T]hey were applying to public finance the psychological principle of “framing” — the notion that when people make decisions without enough deliberation, consultation and information, they are easily influenced by superficial forms and irrelevant details of presentation or wording.”

We know how important it is to appeal to both the head and the heart when driving change.   One of the axioms of persuasion is “Never a statistic without a story, never a story without a statistic.”  Politicians count on the lack of public deliberation, consultation and information to influence their constituencies by deliberately leaving out one side of that equation to suit their purposes.

Deborah Small of the University of Pennsylvania and George Loewenstein of Carnegie Mellon University have run experiments that show that people are more sympathetic to “identifiable victims” than they are to “statistical victims.”

For example, when offered an X% tax cut, most people support it.  As soon as they are told that teachers A, B, & C will lose their jobs, their opinions reverse.  The lesson for change leaders is to anticipate the level of resistance for any change initiative such as layoffs or reorganizations, and frame the discussion appropriately – as possible.  Sometimes limiting discussion to impersonal statistics (appeal to the head) will make it easier to gain support for difficult changes.  Sometimes, introducing the experience of actual people being impacted (appeal to the heart) and staying away from the numbers will help gain support.  However, even though this approach is harder, what we need to do as change leaders is to ensure that there is sufficient deliberation, consultation and information to gain real, sustainable support.  Very interesting.   Read the full article here

Why Medical Bills Are a Mystery

One of the most important components of the CAP model is Systems & Structures, i.e., the underlying systems that every organization has to support the current way of doing business, such as the measurement and reward systems.   This op-ed piece in the NY Times provides a perfect example of a dysfunctional measurement system.

“When insurance companies or government bodies try to control costs, they usually make across-the-board reimbursement cuts that ultimately are unsustainable because they have no connection to the true costs of delivering care. Providers themselves do not measure their costs correctly. They assign costs to patients based on what they charge, not on the actual costs of the resources, like personnel and equipment, used to care for the patient. The result is that attempts to cut costs fail, and total health care costs just keep rising.”

For the all-time-best discussion of measurement and reward systems, please see the classic 1995 article by Steve Kerr, “On the Folly of Rewarding A, While Hoping for B”

John Kotter on The Debt Crisis and Complacency

WASHINGTON — By putting deep spending cuts and substantial tax increases on the table, President Obama’s bipartisan debt-reduction commission has exposed fissures in both parties, underscoring the volatile nature and long odds of any attempt to address the nation’s long-term budget problems.

Among Democrats, liberals are in near revolt against the White House over the issue, even as substantive and political forces push Mr. Obama to attack chronic deficits in a serious way. At the same time, Republicans face intense pressure from their conservative base and the Tea Party movement to reject any deal that includes tax increases, leaving their leaders with little room to maneuver in any negotiation and at risk of being blamed by voters for not doing their part.

The excerpt from the New York Times above is a classic example of one of the key principles of the Change Acceleration Process (CAP) – That the one sure-fire way to surface the hidden resistance you will encounter during your change initiative is to spell-out your vision in observable, actionable, measurable terms. Of course, the flip side of this, so clearly demonstrated in the headline above, is that when you don’t want any resistance to surface be sure to keep the discussion at the vision or the mindset/measures level. 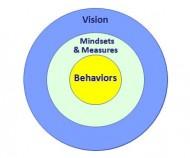 During the run-up to the 2010 mid-term elections we heard both parties trumpet their vision in many ways; “Take our country back,” or “Restore the middle-class.” Most even took the next logical step to the mindsets/measures level; “Lower taxes, reduce the deficit, grow the economy, create jobs, and reach across the aisle…” Who could possibly be against these goals? No one. But that’s all they are – mindsets/measures parading as strategy. It’s not until you drill down to the “how” – the observable, measureable activities and behaviors that you will change – that any resistance comes to light (See the graphic above).

Now the bipartisan debt-reduction commission issues their report that contains many specifics (it still largely ignores the key issues of health care expenditures) such as raising taxes and means-testing social security.   While this is not actual legislation, or even a final plan, it does clarify the nature of what is necessary to achieve the mindset/measures.  Now the electorate can see how they might be impacted by what they’ve asked for.  Stand back!  As the old WWII saying goes, “If your taking flak your probably close to the target.”

Remember, humans are hard-wired to make decisions based on emotions first, logic second. And we are hard-wired to be risk-averse. Consequently, even though the math is obvious to anyone who has thought seriously about the problem, we are in denial about the impact of the changes we are asking for – we can fix the economy/deficit/country but it won’t impact me. Once someone spells out the measureable activities and behaviors required by the change, people see how they will be impacted and they react with resistance.

Most business leaders typically do a fair job articulating a vision, and even do a good job drilling down to the mindset/results level. For example, “We’re going to create a customer-centric, proactive, accountable business,” and “We’ll grow organically by 5% and reduce expenses by 5%.” Who is against that? But once they spell-out the means to achieve those goals; “Stratify your customers into top-20/bottom-80, conduct focus groups with top-10 and survey bottom-80. All customer contacts and results will be entered into the CRM. Conduct regional trend analysis and propose new products and services” – now the resistance surfaces!

There are rare cases where the logic for change is so compelling that there is little resistance to it – but these are rare cases.  If you are in the midst of a large-scale organizational change, and you are not facing any resistance, you may want to evaluate how well you’ve articulated the necessary actionable behavior changes you expect from your people.